About the artists in our current exhibition 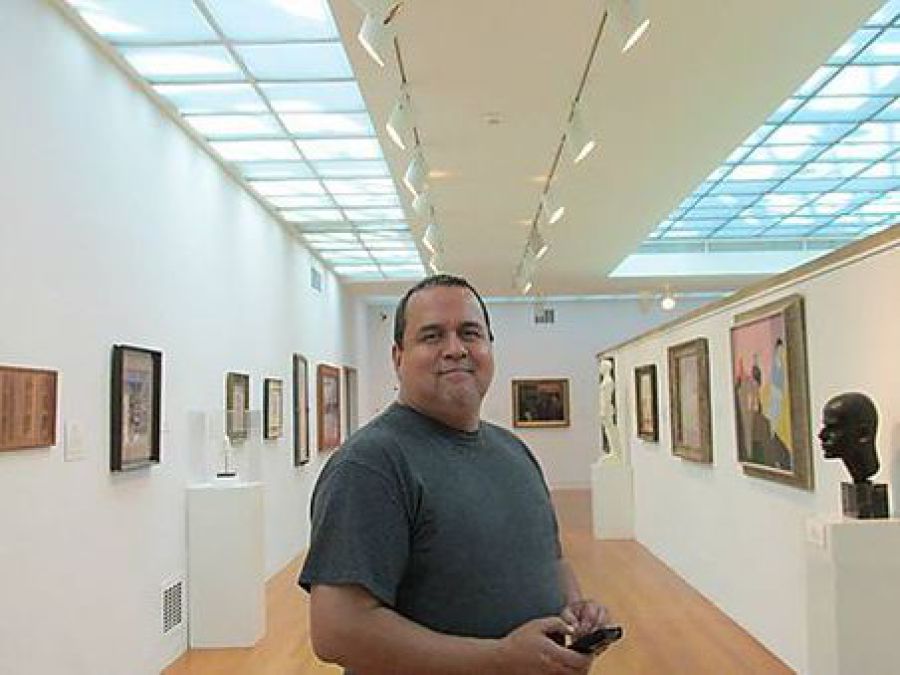 Native New Yorker, Benjamin Casiano is an accomplished creative director, designer & painter. He received his BFA from Pratt Institute in Brooklyn. Painting was always his first love. Inspired and influenced by the great masters worldwide, But it's the women also played a crucial role in his life, which is why he pays tribute to them with his paintings.

Casiano’s work fuses expressionism and pop-cubism. Although he uses geometric and abstract shapes in his artwork, a prominent focal point is the one-eye figurative. “Most of my one-eye figurative are a reflection of my alter ego and a self-portrait of my subconscious,” says Casiano. “Im blind in one eye, but the irony is I was painting figures with a single eye years before losing my vision.”

Casiano always had a love for strings and classical music. “Music and art go hand in hand. I never learned to play but I at least paint my favorite musical instruments with the ladies,” he says. For Casiano, painting has proven to be a positive emotional outlet. His works have been exhibited in galleries in the U.S. and as far away as China. Recognized with numerous honors & awards. Casiano is currently exhibiting in New York City, Philadelphia & Paris. Numerous pieces are owned by corporations and private collectors.

His goal is to simply add something not seen in modern-day culture. Something different, something beautiful, one painting at a time. One exhibition at a time. 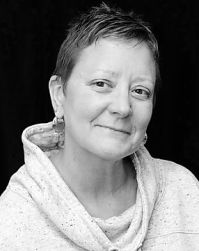 I am a designer who loves to paint. What motivates me is making sense of colors and shapes, leading the eye across the page to rest on an important element. Analyzing why choices were made, and sometimes not - just accepting a serendipitous brush stroke or color mix. My purpose is to express myself in color and shapes, and to garner a response from the viewer.

Sometimes I paint because I want to make an image, or design something beautiful for it's color, lines and flow. It's a sheer exercise of power over my sense of composition and the medium(s) I use. There's a deep satisfaction in being skillful and bringing forth something that people look at and relate too, just because they find it beautiful for itself.

Sometimes I paint to illustrate an event that has affected me deeply: a loved one's heart attack and surgery, my grandfather's dementia and distant personality. These end up being my favorite pieces because they are emotionally driven and close to my heart. The viewer may see my message, share my emotion, or take away their own, but there will have been a connection made, feelings touched upon.

As subject matter, I choose most frequently to paint people. Faces in particular. There's so much to work with from the perspective that people can be enigmatic, fascinating and ever changing. The recurring design style of having two distinct sides of the faces is my way of saying that everyone, always, has one side they show to others, and one side they hide, no matter what the circumstance. 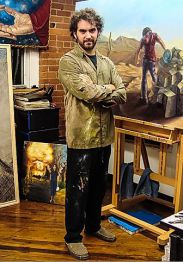 Claudio Altesor was born in Montevideo, Uruguay, on March 20th, 1981. During his adolescence, he began to take drawing classes in Maldonado, Uruguay.

His first painting classes were with the artist Derrick Quarles in Stamford, Connecticut. In the past several years Claudio has studied at Silvermine Art Guild, Greenwich Art Society, School of Visual Arts, and New York Academy of Art.

At the same time, his work has been selected for exhibitions in Connecticut and New York City, including the Bendheim Gallery, Flynn Gallery in Greenwich, CT; Prince Street Gallery NYC, Pleiades Gallery NYC, Stamford Museum, Sheraton Hotel,  Ferguson Library, The Stamford Art Association, the Palace Theatre, and the UConn Gallery, Stamford, CT, also he is a Cofounder of Liber-Art painters association and member of the Loft Artists Association.    He was also the Art Assistant for the photo-realistic painter, Steve Smulka from 2006 to 2009, now Claudio creates paintings on commissions. Since he began surrealistic painting several years ago, has focused on existential themes that involve a human being.

Leonor is an artist based in Westport, CT. Born in Venezuela, she studied art from the age of four.

She studied at the Univerdidad Andrés Bello in Caracas, where she was awarded a Bachelor’s Degree in Literature and Art. She taught art and Art History in Elementary and Middle Schools for four years.

She came to New York in 1996 to study Fine Arts. She obtained a Degree in Fine Arts at Parson’s School of Design and a BFA in Animation from the School of Visual Arts, where she won the contest for the design of the Animation Dreams Exhibition, a yearly event held in SVA to showcase student work. During this time, she did an Internship at MTV Animation Studios. She has worked in illustration both for children’s books and other publications. She is a member of the Artists Collective of Westport, and exhibits her work locally. Also she leads a program of Art classes for adults with disabilities.

Her work is the product of both imagination and observation. Leonor projects the world around her, but her interior landscape always come across in her work, introspective and whimsical.

Yvonne’s passion for art was sparked while studying fashion design at Marangoni Instituto in Milan. Since then, her creative journey has taken many forms, from running her own interior design firm to working as head stylist for AtHome Magazine.

After taking classes at Silvermine Arts Center, the primarily self-taught artist began experimenting with different mediums, including acrylic, graphite, gesso and watercolors, finding joy in combining them all in her mixed media paintings.

Yvonne paints from her home studios in Westport and Miami, and sells and exhibits her work in several interior design stores and galleries in both Connecticut and Florida.

Claveloux invests her time into the art and design community by speaking on panel discussions, donating art to worthy causes and fostering relationships with both established and up-and-coming designers. As she encounters these new opportunities, she continues to evolve her artistic eye and explore the world around her.

Richard Thomas Patton IV is an international contemporary abstract artist. His artistic process began at an early age. As a child, he showed an interest and talent in drawing, that later grew into a career and life as an artist. Richard majored in Art in Graphic Design from Western Connecticut State University, School of Visual and Performing Arts in Danbury, CT.

“After graduation, life led me to painting. My work is spiritual to the point that the act of painting becomes like a form of prayer or meditation.” His work expresses emotions, feelings, ideas and beliefs: created through the use of vibrant colors, bold compositions, textures, and patterns.

Richard has exhibited his work in solo and group exhibitions throughout Connecticut, including the historical McLevy Hall where he was recently awarded a grant for his work “Ethiope” depicting “Little Liberia” and Bridgeport’s rich history. “Ethiope” is permanently installed at The Housatonic Museum of Art.

His art work is owned by private collectors in the U. S and internationally. Also part of public collections such as Yale New Haven Health’s Park Avenue Medical Center and The Norma Pfriem Breast Care center

“Painting takes me back to my beginnings as a child where my mind and imagination are completely free and my creativity can run wild. It allows me to express my true emotions and feelings and give my perspective on the world and how I see it. It is a beautiful thing!” 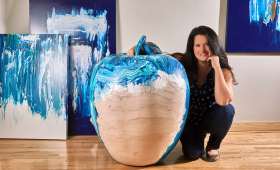 Her signature cell details and drips down the canvas sides are evidence of the movement and spontaneity of her process. Jen comes to painting with great enthusiasm, curiosity, intuition, love of color, nature, and positive energy.

You may have seen Jennifer's work on exhibit on the monumental screens at the Oculus World Trade Center, her solo show on LinkNYC across from Lincoln Center, and closer to home in recent exhibitions at the Mattatuck Museum, Rene Soto Gallery, Carriage Barn Arts Center, and Ridgefield Guild of Artists. Jennifer lives and works in Danbury, Connecticut. Born and raised in White Plains, New York, she studied Visual Arts at SUNY Purchase, and then began working as a commercial photographer for over twenty years. Jennifer's curiosity has led her to simultaneously pursue many creative outlets including furniture making, hand dying fiber, and of course painting which is now her greatest passion. Continuously learning technical processes, inventing new ways, and using old and new to conceive something beautiful is the common thread in all of her pursuits. "Working in abstract painting, going beyond the representational world, to the pure, raw, power of emotion is what excites me. When colors combine, when we make a mark that means something to the spirit, beyond the known familiar image, breaking past the facade of our perception to something greater, that’s what motivates me."

In my work, my main focus is in the color patterns in an effort to invoke emotion and/or metaphorical symbols. The colors should project not only my emotions as the artist but also as an effort to be a reflection of the viewers reaction back onto the painting. My main inspiration has been the female figure and representation of femininity. This is established not only through the main focal point but in the brightness of the colors chosen. I enjoy working with sharp angles, repetition of shapes, and the rounded figures in my female subjects incorporating musical instruments to echo femininity and the many shades it carries.

My paintings are a mixture of quick anxious taps to short flowing brushstrokes. I like my pieces to be light, colorful and happy but at same time adding the darker shades to contrast the warm colors as a grounding effort on the painting. The characters in my paintings are at times not as easily to catch, in an effort to persuade the viewer to look deeper into the piece. I am a believer in simplicity and beauty, light and fluffy. I allow the true meaning of my paintings to reach the viewer through a pseudo-happy bridge in order to lure them deeper into the metaphorical, political, emotional thinking behind it.

Michael David Brathwaite was born on February 7, 1951 in New York City and is a graduate of The Cooper Union for the Advancement of Science and Art in which he received a BFA in 1978.

He as been a painter for 57 years and has exhibited his work at numerous galleries and museums. His work is representative of abstract painters from New York City during the 1970's.

He has studied with many internationally known artists such as William T. Williams, Jack Whitten,  Will Barnet,  Steve Posen,  Hans Haacke, Debora Remington and many others.

Once a longtime resident of New York City, he now resides and works in Norwich Connecticut.

Tara Blackwell grew up in a household filled with artists-- all with differing artistic styles and modalities. The early deaths of her brother and father left her, a young painter, struggling to find her voice without her beloved teachers. In retrospect, processing these tragedies is what Tara, now a mature artist with a unique, exciting style, believes most accounts for the complexity and depth of her current work in which she employs bold colors, layers and texture.

In her CORNER STORE and SATURDAY MORNING series, Tara utilizes her commercial design background to take us back to her childhood. By recreating familiar logos and packaging into a visual narrative of her youth, she transports us back to our own-- offering us a touchstone to childhood joy. Exploring vintage imagery with subversive wit and whimsy, Tara transforms symbols of the past into a contemporary artistic vision. 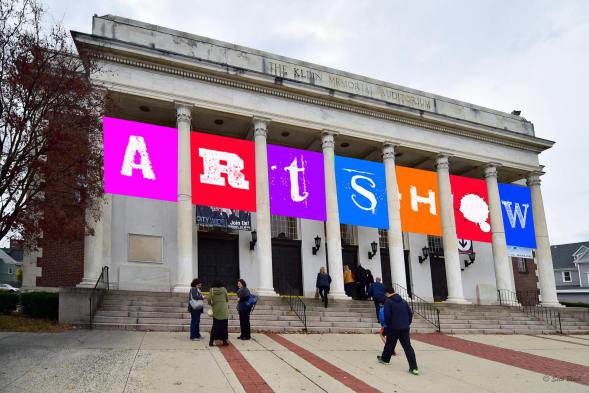